A tithe map is a detailed survey of a landscape, which denotes area boundaries and which was in common use prior to ordnance survey maps.

A landowner had a tithe map drawn up in order to show not only his land, buildings and other assets, but also to show to whom he rented particular portions of land/buildings (tithe apportionment). There was no standard size or scale for tithe maps

Three copies were generally made:

You may find papers and letters relating to tithe payments made by parishioners in parish collections.

The tithe was an annual payment of an agreed proportion (originally one-tenth) of the yearly produce of the land, so it was important that each area was marked accurately so as to establish the fair tithe. 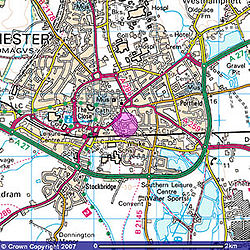 Ordnance survey is a collection of maps, of a standard scale and size, and more detailed than a tithe map. Begun in 1840, this is the first comprehensive historic mapping of England, Scotland and Wales. In 1841, the Ordnance Survey Act gave map makers a legal right to 'enter into and upon any land' for survey purposes. January 1st 1841 saw the publication of the first of these standardised maps, it was of Kent, although use of the name 'ordnance survey' wasn't used until c1810.

Although OS maps do not give any information about the occupants of an area, they do include geographical features we would expect to find on modern maps. The maps are detailed enough to show the existence of a building as well as giving a clear idea of the topography of an area. Churches, pubs, farms, mines, factory works and important houses are often named, although roads are usually not.

The Godfrey Edition This company produces reprints of Old Ordnance Survey Maps of towns throughout Britain and Ireland. Most of the maps are highly detailed, and reprinted at about 14 inches to the mile. They cover towns in great detail, showing individual houses, railway tracks, factories, churches, mills, canals, tramways and even minutiae such as dockside cranes, fountains, signal posts, pathways, sheds, wells, etc.. Each map includes historical notes on the area concerned. Many also include extracts from contemporary directories.


Other useful types of maps and mapping

Back to Records Office Guide

Retrieved from "https://reference.familytreeforum.com/index.php?title=Maps:_Tithe_and_Ordnance_Survey&oldid=92699"
This page was last edited on 25 September 2022, at 08:30.
Content is available under GNU Free Documentation License 1.3 unless otherwise noted.
Privacy policy
About Family Tree Forum
Disclaimers