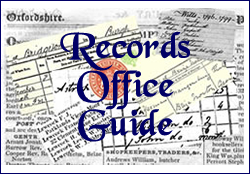 A Guide To Information Available In Your Local Records Office

The biggest headache in locating record offices is boundary changes. Records that relate to your area often end up archived in their original shire county despite the introduction of unitary authorities and metropolitan boroughs and counties.

To view the set up of Counties Prior to the changes implemented in 1974, click here

Image sourced from the ONS and subject to Crown Copyright

The indexes are divided into quarters for each year up to 1983. Remember that the index relates to the time of registration NOT the time of the event. Since 1984 events have been arranged in alphabetical indexes covering a full year. Exact place of birth is not given, just the name of the Registration District with a different reference numbering system.

The Office for National Statistics (ONS) Indexes and copies have been distributed nationwide. Some can be viewed in local libraries, County Records Offices or even Local Archive and History Study Centres. You will not be charged for viewing these images. These images are available online but the odd sheet is missing.

How do I find them? 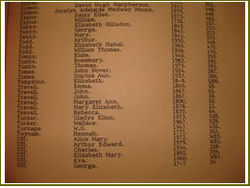 Registers are held in many different locations and there is no comprehensive index to them. Before the 1850s the vast majority of burials were recorded in the parish registers of the Church of England, although some nonconformist chapels had their own burial grounds. After that, the situation becomes much more complex, with the beginning of private and civic cemeteries.

If the death took place before the mid-1850s, you should start by looking in the relevant parish burial registers. Most Church of England registers are deposited in county record offices, although later ones may still be held at the church. An Act of Parliament in 1853 enabled local authorities to purchase and use land for the purpose of burial. So although many burials continued to take place in local parish churchyards (particularly in rural areas) the situation in large towns and cities became much more complicated. You will need to consult maps of the area to find out which cemeteries and churchyards were situated closest to the person’s home address.

Cemetery and crematorium records are generally held and maintained by local authorities. Their addresses can usually be found on the relevant local authority’s website, and in local phone books. Contact details for over 1000 burial grounds and crematoria can also be found at The Bereavement Services Portal

What do they contain? 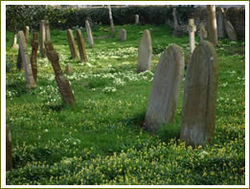 The Graveyard in Charlton, Oxfordshire

Unfortunately, different burial registers during different periods of time differ in their format and the amount of information they contain.

In early parish registers we encounter a simple written statement such as “John son of John Cowl and Mary his wife, was buried 10 January 1782. In later parish registers, we find a pre-printed page with columns of information, including entry number, “Name”, “Abode”, “When Buried”, “Age”, and a final column “By whom the ceremony was performed”. In addition, it is not uncommon for the vicar to add other notes.

Essentially, the later registers contain the most information, and so these must be the ones on which our “standard” is based.

Sometimes, earlier registers have more information, and even the later ones have additional information written in the margins on occasion.

Generally you could expect to find the following: 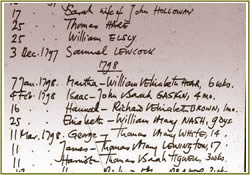 Parish registers were started in England in 1538. A law was passed ordering the clergy to record baptisms, marriages and burials, and that they should be written down in a book after the service on Sundays, and in the presence of the Churchwardens. Before this date there were no records, except for a few created by monks who recorded the events for prominent families. Many churches, however, did not begin keeping records until a further notice was sent out in 1558, and even then, many did not comply.

In 1597, Queen Elizabeth I decreed that all existing records should be copied into "fair parchment books, at least from the beginning of this reign". There was considerable opposition. Many churches complained that they could not afford parchment books, others began the task, some started with the 1558 records, some omitted large sections as the task was too large, and some did not start at all.

Some of the early 1538 records (re-written in 1597) still exist, but it is not at all unusual for the registers not to have been preserved. Many were lost, and it is quite common to find no preserved records for a parish until a much later date.

Most of the parish registers are now stored in a County Record Office, although a few are still in the individual churches.

Over time, more information was recorded in the parish registers.

What will I find?

On each census you should find recorded: Address, name, relationship to the head of the family, marital status, age at last birthday, gender, occupation, birthplace, disability.

Some censuses only make reference to a household number rather than a formal numbered address.

The 1841 Census did not declare relationship to head of household or marital status and was lacking in the detail of later censuses. Birthplace was not stated, other than whether or not the person was born in the county, or if not born in England/Wales then whether they were from Scotland, Ireland, or "foreign parts".

Ages of persons over the age of 15 were supposed to have been rounded down to the nearest 5 years. For example, a man and wife aged 52 and 48 should have been recorded as aged 50 and 45. However there are many instances where the age of adults was not rounded down, or even where the age was rounded up instead of down. Ages of children below 15 were supposed to have been stated to the exact year.

On all censuses, you may find that with institutions, small villages and hamlets, residents or inmates are recorded using just initials, age and/or a birthplace (if known) or otherwise just initials.

Each entry on a census is given a four part reference: class (RG or HO) + piece + folio + page number, which is a unique reference given to a particular page. Everyone recorded on one particular sheet will have this same code. The example to the right is recorded as RG13/3194/50/2. The image shows the class and piece reference found at the foot of the sheet.

Census dates in the Victorian Era

Census records are usually transcribed for online viewing in this format:

How are they useful?

When evaluating census information it is worth remembering that they are merely a snapshot record made every ten years. Ancestors may be missing due to war or may simply have been in transit on census night and lodged somewhere. There is an element of inaccuracy that researchers need to factor in to their findings and they should be used with other sources of evidence to gain a fuller picture. Particular details on these records may give clues as to personal wealth and social standing e.g. when an entry declares living by own means. If you can follow the record of one person alone through the decades you can sometimes see how a person's life or career has developed e.g. at 16 a person is a groom, at 26 is a clerk, at 36 has a family, at 46 has a factory, at 56 has servants and so on.

Census records provide a useful framework in that they allow us to track the progress of a family over a long period of time. Sudden omissions may point towards other searches such as death records, census entries in army barracks or institutions and maritime records. Conversely, a known death or marriage between census years enables us to switch our attention to other family names. Modern websites such as Ancestry have made census access more convenient but there are mis-transcriptions aplenty which should also be borne in mind.

See Census Search for tips on how to use the census returns.


England and Welsh Census Information for 1911

The 1911 Census records for England and Wales are subject to the Public Records Act 1958 (Instrument No 12 dated 1966), which specifies a closure period of 100 years. The records will be opened to the public in 2012.

It was possible, following concessions announced in 1972 and 1989, for limited information to be released from the 1901 census to direct descendants and next of kin for family history purposes before the records were opened to public search. However, the concessions specifically referred to censuses prior to and including the 1901 Census and therefore did not apply to the 1911 Census. There are no plans for a similar concession relating to the 1911 Census.

A concession announced in 1993 relating to the 1911 Census is conditional upon the applicant requiring the information solely in order to establish a legal entitlement and would only be considered where the information could not be obtained from any other source.

The office For National Statistics

Other Types of Records

Back to Creating Your Family Tree

Back to Main Page

Retrieved from "https://reference.familytreeforum.com/index.php?title=Records_Office_Guide&oldid=92713"
Category:
This page was last edited on 25 September 2022, at 12:22.
Content is available under GNU Free Documentation License 1.3 unless otherwise noted.
Privacy policy
About Family Tree Forum
Disclaimers